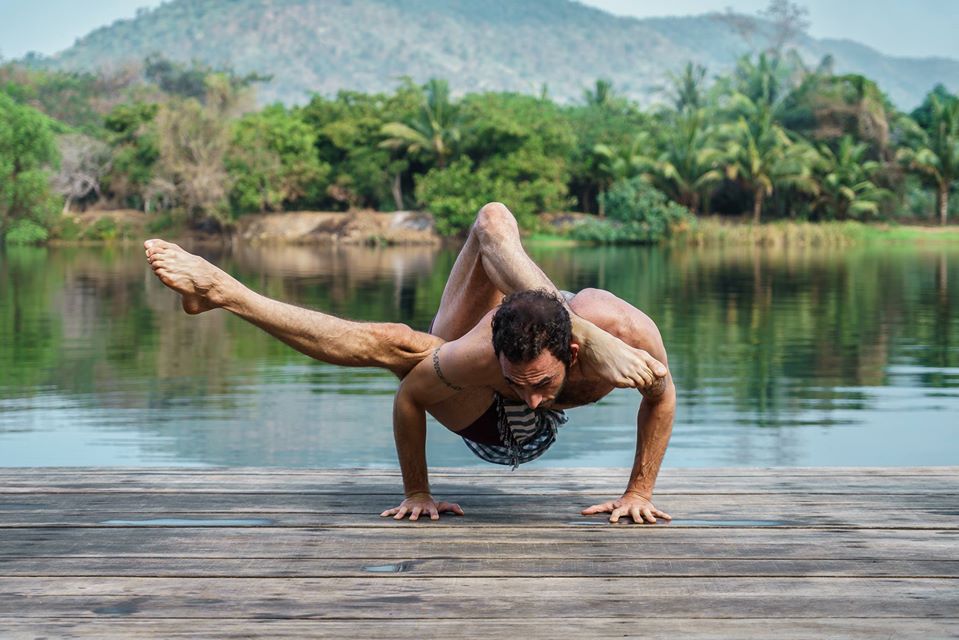 The World is Your Mysore Room

I rolled out my mat on the balcony of our one-bed apartment. The construction next door had been tolerable but this was earth removal day and the sound of tonnes of earth poured into stinking trucks was too much. I strode to the park down the road with my rolled mat under my arm.

It was supposed to be the first time doing Advanced A but was worried as I hadn’t done that tough sequence for a few weeks. Was a public park the best place to try?

We’d been in self-isolation in Australia for two weeks after a shotgun relocation from Laos thanks to COVID. I’d been discombobulated in quarantine, mostly doing Primary Series to try and calm down. I had done Intermediate Series two or three times and Moon Sequence once but Advanced A seemed too drastic, too challenging.

Even though I’d been doing Advanced A for a few years I find it hard to practice home alone. I always appreciate the energy of other people to help me through.

I would never have thought I’d have progressed so far in the Ashtanga system nine years ago when I got Kino MacGreagor’s debut DVD set – purely on the basis that “Ashtanga” sounded the most Indian compared to other styles on offer. I learned at home mostly and have always been a home practitioner at heart.

Sure, it wasn’t ideal. But I was unemployed for two years. Broke and living in parts of Wales where sheep rustling was still a major concern for the majority of the population. It wasn’t the kind of place where you’d find an authorised teacher and chai shop. Then I moved to Cambodia and stayed there for ages.

I made it to shalas when I could. The first time was at Dharma Shala in London. I turned up clutching my cheat sheet and put it at the top of my mat. The ink had run where my sweat had blobbed onto it. Heat pulsated from the walls. The sound of breath resonated cut only by the bang of someone landing Pincha Mayurasana. I was terrified.

I also have to give props to Ashtanga Yoga Bangkok (AYBKK) which was the shala I attended most while living in Southeast Asia. That place, on Sukhumvit Road, with its dedicated practitioners and powerful chant was beautiful and fucking hot. To be fair, I have been to dozens of studios around the world now and Dharma Shala and AYBKK are the hottest. I remember wringing my towel on a rainy London road outside Dharma Shala and a torrent of sweat hitting the tarmac like I’d emptied a bucket.

But those were rare occasions. I practiced alone most of the time. Especially in Laos where pollution meant I had to line my mat right up next to an expensive air purifier to ensure my ujjayi breathing didn’t give me bronchitis.

I’m used to being self-motivated. I love to practice in a group class but most of the time I had to rely on my own dedication. I can’t say where I got the motivation to do something so difficult. My inkling is that I was desperate. I had a chaotic, unhappy life and no job. I needed yoga to stay sane. And when I recovered from all that, the hard work of building a habit was done.

But my motivation gets wobbly when it comes to doing Advanced A – also known as third series. My favourite series is Intermediate because I love back bending. It also requires a balletic attention to detail; a refined articulation of the spine that spellbound my attention. And Primary Series is like a comfortable pair of underwear.

However, Advanced A has long been a horror show. While I was able to learn the first two series via videos, occasional classes and bloody mindedness the third series beat the crap out of me. For a long time, the energetic output it required left me a shell of a man, laying in shavasana feeling like I’d been beaten up.

Maybe I should have backed off. Slowed down. But it was never my way. And anyway, when I spoke to Ty Landrum for a podcast episode (Escaping Samsara Podcast – where you are reading this) he said some people do need space to work with “dark energies.” That resonated with me. It’s a shame you won’t hear that interview because, alas, I didn’t download it from Skype properly and its now been deleted. You’ll just have to trust me.

Years passed and slowly Advanced A got more comfortable. Much of it came down to battling my own sense of “not good enough” – that hacking cough in my heart. It’s been with me so long I never knew it wasn’t as part of me as my liver, or my smile. Perhaps Advanced A helped me see that. By helping me constantly fail to flow through it without panting and grimacing.

I had felt the same about Primary Series and Intermediate. But when they were down, there was always the next thing. The next pose. I may as well have given myself that old school punishment of having to write lines, like my hero, blogger Grimmly (who I liked to call Sri Grimmlyji) who made himself write 100 times, “it’s not just about pretty asana.”

The weird thing is that I took six weeks off yoga last year. The longest time since I started. And when I returned, Advanced A slotted into place. Somehow, throughout that hibernation my sinews had absorbed the series. It was still hard and I still had to take breaks during the arm balances to flick my wrists like wet towels, wringing pain from my joints, but it flowed in a way it never had before.

But that was just the physical side. The phrenic war continued. Battle commenced staring at my toes in Samastithi – band aids on each big toe dressed blister-like abrasions caused by landing in chaturanga dandasana repeatedly, known as “Ashtanga toe.” By triangle pose I’d already talked myself out of it. I’d do Intermediate Series instead, maybe add on a few advanced poses at the end if I had the energy.

I tried to make resolutions. I’d do third series twice a week. But it rarely worked. Sometimes I’d substitute Matthew Sweeney’s “Bound Sequence” instead – his version of third series which I find a bit more approachable as it has less vinyasas.

So, by the time I strode out from our Australian holding pen, mat under my arm, glaring at builders in their big boots, I wasn’t sure if I’d stick to my decision to do third series. Unlike Laos and Cambodia, there was a commodious exercise park running the length of a beach. Queensland has escaped the worst of the coronapocalypse and citizens are still allowed outside and so, just like any other day, the park was awash with runners, jumpers and dog walkers. The yoga-panted and muscle-bound sanctified themselves with sweat. I trotted in-between them towards a paved area good for yoga.

I fortified myself. Committed. If I was going to stand up with one leg behind my head and catch the attention of Aussies on their home turf and potentially blow the minds of passing children, then it had better be the best damn Advanced A I ever did.

OK, I said to myself. Pretend your Sharath, circa 1999. No showing off. Just delicate hops. Pure efficiency and concentration. Drishti would be essential if I was to maintain focus and make it through.

The demandable thing never flowed so well. Afterwards, an old bodhisattva in sunglasses came up and asked me how long I had been practising. We sat on the grass and conversed a while. He spoke in an Irish accent and said meditation was just about letting go. He said you could see it in the wind and how each blade of grass fluttered. The vivifying air glowed with prana. We smiled slipping into samadhi, talking about motorcycles.

“I only practiced outside today because the builders were making such a racket,” I said.
“You don’t usually?” The bodhisattva said.
“I feel self-conscious.”
“No don’t feel that,” He said. “If only one person sees you and gets inspired to practice then it’s worth it.”
I nodded, letting the permission to shine settle around my old coughing heart.

So, the next day I returned. Did third series again. People stopped and watched a while and then moved on. I wondered how it was easier to practice in public then at home. Was I just riding the high of exhibitionism? Partly.

Partly also because, with an audience, even an unofficial one of passing dog walkers, I got that extra umph to do my best. It’s a similar feeling to being in a Mysore class and that’s why us exiled Ashtangis, with our COVID-closed studios, should consider practicing in public if we can. It duplicates the feeling of wanting to do your best.

But more subtly, there is that energy of being with people. Who knows what they were thinking when they saw my legs surge up and over my bedrock ribcage, feet floating like dandelion seeds in the air. Whatever their participation, it buoyed me. I felt energised like those extroverts who get their energy from being around other people.

Group energy is what brings us all to Mysore rooms around the world. Together we can lift our sweaty souls easier. And in the time of COVID we worry about losing out. But I learned that group energy can exist in our shared spaces. Even if we are not allowed out in big groups and we have to be distant from each other. Our connection is still valid. It can still lift.

If you are in true lock down, I hope you can get out soon. Find a place supported by nature, or strangers, it’s still there. You can see it with the right kind of eyes.