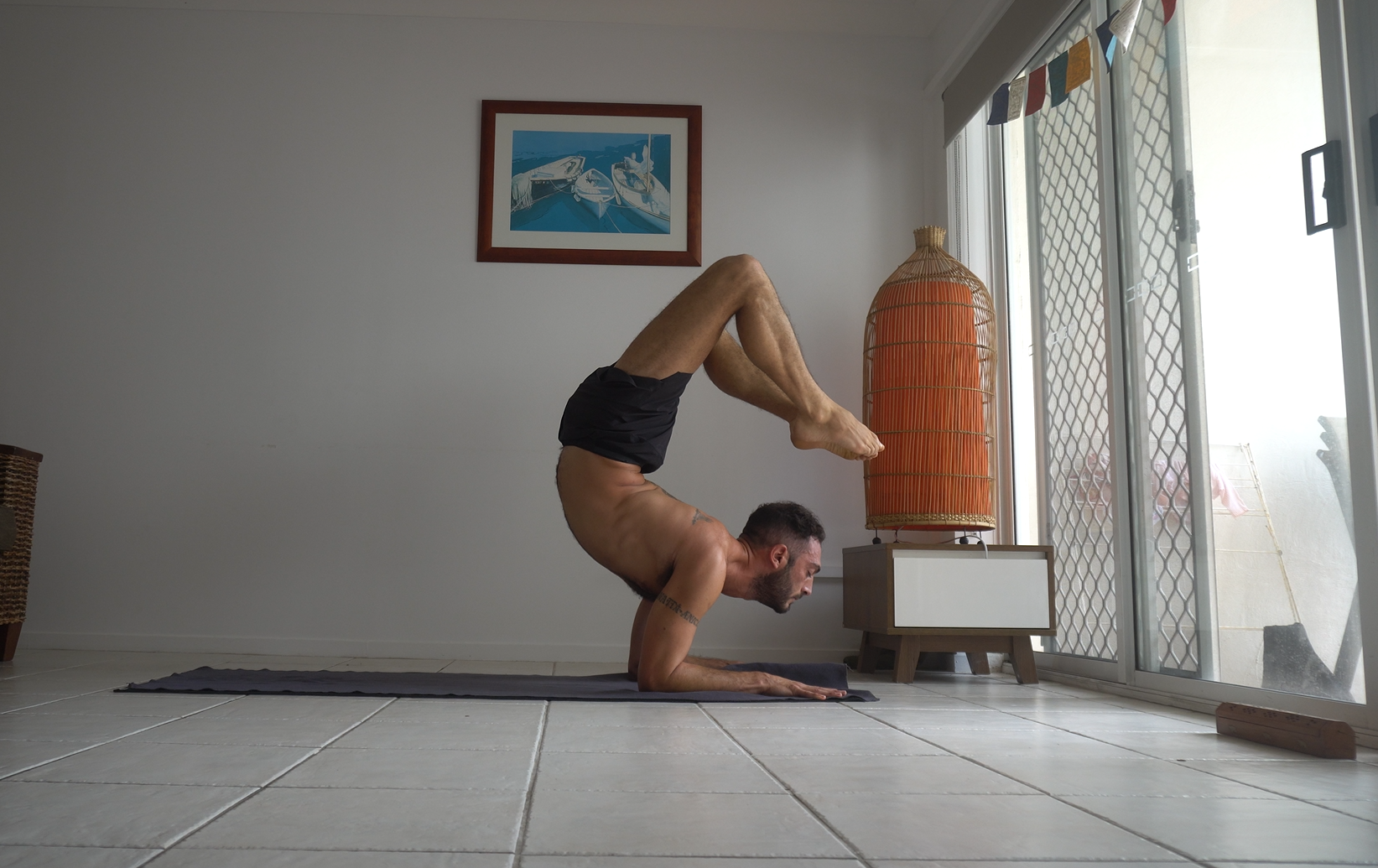 I’ve been taking A.G. Mohan’s online pranayama course. In one of the lessons, he mentioned practising pranayama for 108 breaths, three times a day.

He emphasized Krishnamacharya’s melding of asana and pranayama. For him, good, solid ujjayi breathing within asana is pranayama.

So, he suggested picking nine poses and doing 12 breaths in each pose to equal 108. Make the practice “breath centred,” Mohan said. Which I took to mean making the breathing long and smooth.

Doing fewer poses with longer breathing reminds me of Grimmly’s “Proficient Primary Sequence.” Something I have been practicing for a while now.

Here’s what I did:

I treat all the poses like mudras so I apply the chin lock (jalandhara bandha) and curl my tonge back against the soft palate in the baby version of Khecari wherever possible. Mula and mini-uddiyana bandhas are in full effect.

The bandhas and mudras seal my attention around the breath and I observe it rise and fall up the central channel of my body.

Ujjayi Anuloma, 12 breaths. I have been doing Ujjayi Anuloma even without Kapalabhati before starting my usual Ashtanga practice and find it very calming and grounding.

Often, there can be a bit of adrenaline or excitement/aversion when commencing my Ashtanga practice (especially in a busy mysore room). This simple breathwork allows me to focus and come inwards before starting the movements.

Starting with a few Sun Salutations to warm up (not counting these as part of the “nine poses”).

OK now we’re into the nine poses (finally, after 30 minutes faffing around). First up: Padangustasana/Padahastasana six breaths in each variation.

Trikonsasana. Six breaths on each side. I take a wide stance these days to lengthen the waist.

Pascimottanasana – 12 breaths. Feeling the lack of standing poses to open my hamstrings with this one. The damn hammies feel like iron these days.

Janusirisasana A. Six breaths each side.

Hanumanasana. This is my edge pose. Good to challenge the breathing with some harder poses. Again, 12 breaths here.

Bharavajrasana. Six breaths each side. This represents the “turning” from forward folding to backbending.

Vrischikasana. Another challenging pose to hold for 12 breaths. Swami Satyananda extolls this pose as very powerful because it reverse key energy flows in the body. The apana vayu is upended and prana in the chest is stimulated.

Shoulderstand and Headstand. I wanted to magnify the effects of the inversions so I set my pranayama app (Prana Breath on Android – not being paid to mention that) to count me a 10 second inhale and 10 second exhale. Stayed for 12 breaths in each.

Krishmacharya recommended extra long breathing in inversions as a preliminary training for meditation. It certainly helps train equanimity and determination which the long breathing keeps the nervous system calm and the concentration razer sharp.

That’s the 12 poses. I finished feeling wonderfully energised. The prana vibrated throughout my body in a similar way to finishing an ashtanga sequence but with a stronger sense of grounding. To me, ashtanga sequences flow like a big cat in the forest; this made me feel strong and calm like a buffalo.

I still had time so I threw in my favourite mudras and paranayamas to finish.

Maha Veda Mudra. Holding the breath and pound your thighs to the ground to wake up Kundalini.

Nadi Shodhana as taught to me by Gregor Meahle.