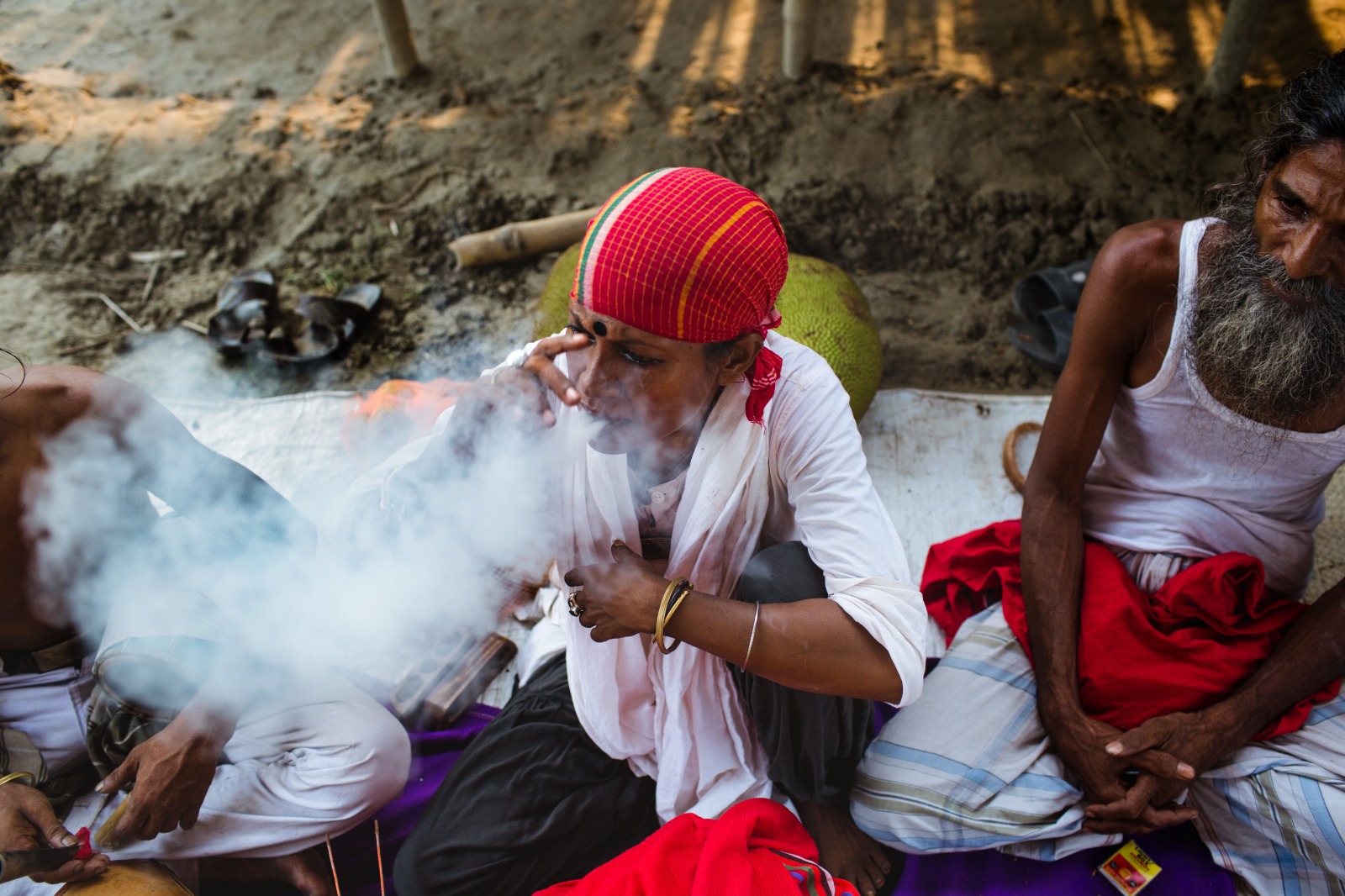 Rumana Afroze – In The Deluge Of The One

The shrine has a mosque-like roof, white as a meringue. People, some in robes, walk in-between evergreen trees laden with jackfruit. It’s the rainy season in Bangladesh and everything is hot and wet.

Muhammed Ali fixes us with a calm gaze beneath authoritarian eyebrows. Behind him, a woman sweeps around the grave of saint Lalon Shah and that of his mother. The two six-foot-long prisms are covered with patterned material and spicy smokes threads through latticed burners.
Lalon’s main disciples are buried outside the small mausoleum. Ali points out one of the graves, “my father lies there. I inherited the role of caretaker from him,” he says.

He takes us to the main hall. We slip off our shoes and step onto cool, white stone. Inside, devotees recline in the midday heat. Women and children sit around bags of spicy peas and rotis, their saris the colour of oak and red squirrels and emerald.

Lalon Shah lived and taught here, in Kushtia, Bangladesh throughout the 19th century. He died in 1890 aged over 100 years old.

“Lalon was one of the most influential mystic saints of the Indian subcontinent. He has inspired millions with his songs,” said Lalim Haque, a researcher and Lalon expert. “His lyrics are so profound he has been able to touch the lives of not only people who have a taste for music but all people.”

Haque is kind and avuncular. He said Lalon’s songs, especially when heard in their original Bangla, have the power to propel people to spiritual heights. Estimated to have composed thousands of songs, Lalon and his followers went on to influence 20th century greats like Rabindranath Tagor, the Bengali poet, Allan Ginsberg and Bob Dylan. To contemporary Bangladeshis he is like Shakespeare, Martin Luther King and Ekhart Tolle rolled into one.

Barely an hour goes by at Lalon’s shrine without a song being sung, day or night. The twang of the ektara, a single-stringed instrument, its sound somewhere between a banjo and a sitar, joins scurrying drums and tinkling symbols.

His followers are called Bauls, they are a mystical sect found in Bangladesh and West Bengal. Some are part timers with families and jobs who don white robes and sing songs of egalitarianism on the weekends. Others are homeless mendicants, devoted to the path.

Outside the shrine, there is a park with a ten-foot portrait of Lalon. It wafts with weed and tobacco. Rumana, a former lawyer, has been a full-time Baul for 22 years. She plants a clay pipe between her fingers, cups her hands and inhales. She is charismatic, intelligent and, unlike many of her companions, reveals clean white teeth whenever she smiles, which is very often. She can speak English but refuses to be interviewed until we come back with a translator saying that Bengla is the only language she can use to describe these sacred things.

She smokes weed every day. She says it helps her focus and access a meditative state. “We believe that Lalon’s songs are as important as the verses in the Quran. In Islamic law people are obliged to recite verses from the Quran every day; similarly, we Bauls sing Lalon’s songs every day,” Rumana says.

She exhales a plume of smoke and passes the pipe to a friend with a matted beard and creased, bloodshot eyes. She picks up her ektara, and starts to pluck, making up for her rudimentary singing talents with an enthralling sincerity.

The Baul with the matted beard calls for tea prompting the sari-swaddled women in a nearby stall to bawl at her daughter who jumps and soon arrives with tiny cups of tea that would be unpalatably strong were it not for large scoops of sugar.

Muhammed Ali places his teacup down on the shrine floor and strokes his beard. Behind him a Baul group start to sing a favourite song of Lalon, “A Strange Bird,” translated here by Azfar Hussain.

Look, how a strange bird flits in and out of the cage!
O brother, I wish I could bind it with my mind’s fetters.
Have you seen a house of eight rooms with nine doors
Closed and open, with windows in between, mirrored?
O mind, you are a bird encaged! And of green sticks
Is your cage made, but it will be broken one day.
Lalon says: Open the cage, look how the bird wings away!

Even though I don’t understand Bengla, the song opens my heart with longing. The song makes me want to rush over to someone and fling open my arms. There is no applause when it’s over.

When it’s finished the Bauls bless the song and their audience by saying “shai shai, shai shai.”